Newest Posts are at the bottom.

This project consists of a 4 rank Great division which will be operated by a Rodgers digital organ.  The ranks consist of 8' Principal, 8' Gedeckt, 4' Koppel Flute, and 2' Super Octave.  The Gedeckt and Koppel Flute are vintage pipework while the Principal and Super Octave are newly designed and constructed specifically for this project.  This is the elevation of the pipework which will be installed in the balcony of the church. 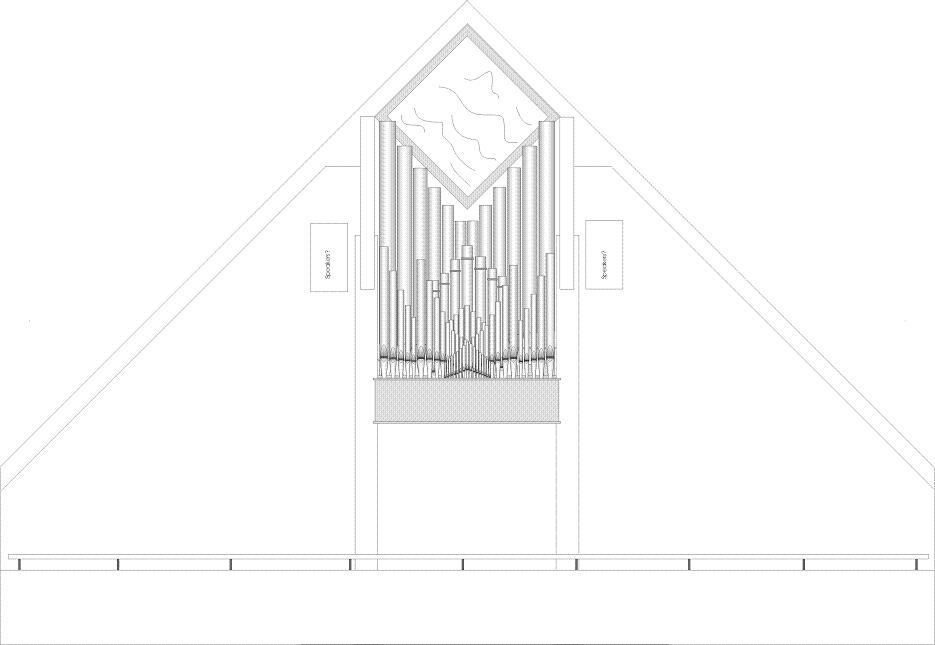 The first step is to evaluate the condition of the vintage ranks of pipes and to make any necessary repairs to restore them to near new condition.  The largest pipes of the Gedeckt required some minor repair and a new coat of paint.  The following series of pics shows these pipes. 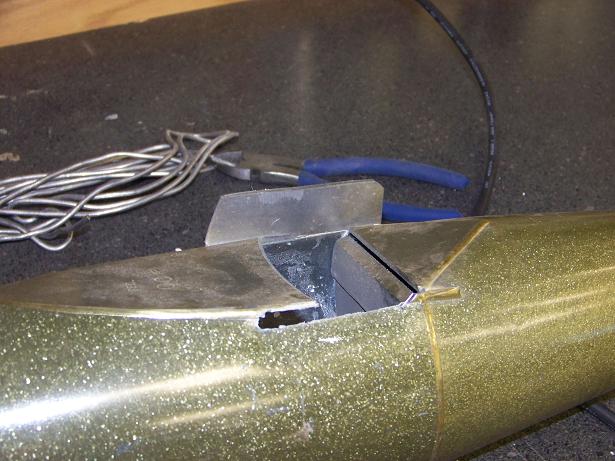 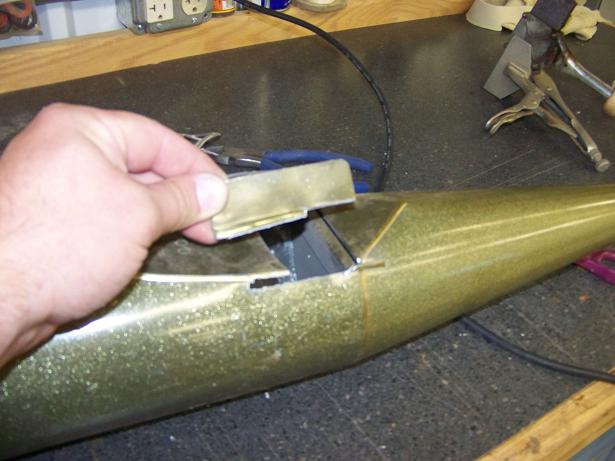 Here is the missing ear being held above the place it belongs. 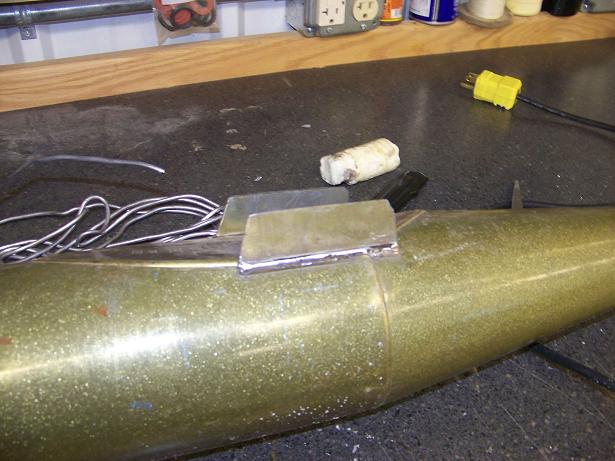 Here is the ear after being soldered back on to the pipe. 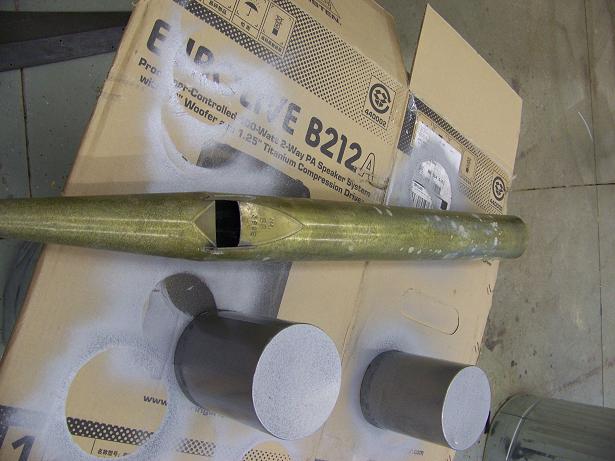 Here is one of the vintage Gedeckts ready for a nnew coat of paint.  Aside from being quite unattractive, the original green colored shellac has corroded badly (white areas) and started to flake off.  The cans at the bottom of the picture are the caps of some of the other Gedeckt pipes which have already been sanded and repainted. 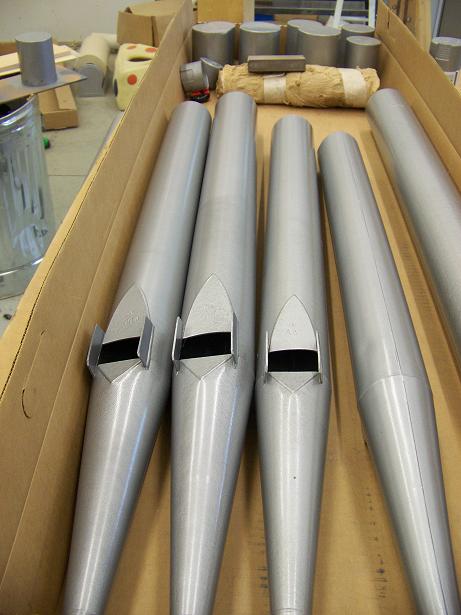 Here are several of the Gedeckt pipes with their new "hammered silver" finish. 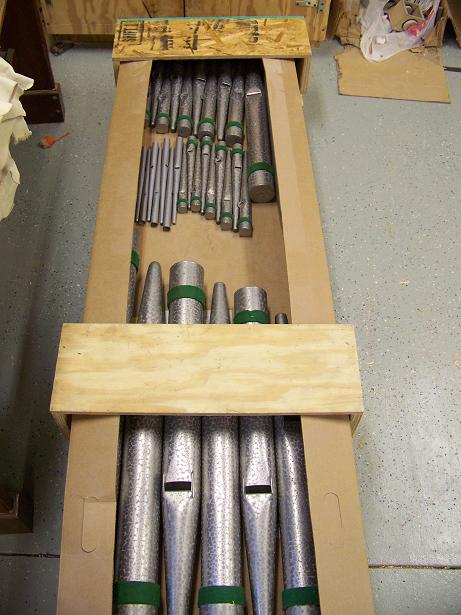 Here are the remainder of the Gedeckt pipes.  These pipes are made of an alloy of tin and lead called "spotted metal" in the organ world because of its spotted appearance. 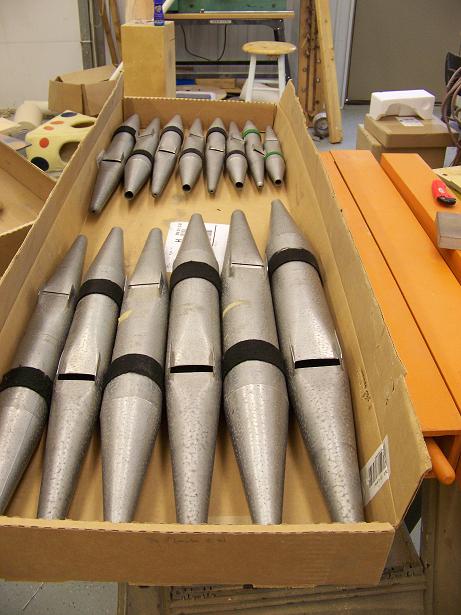 These are the pipes of the Koppel Flute. 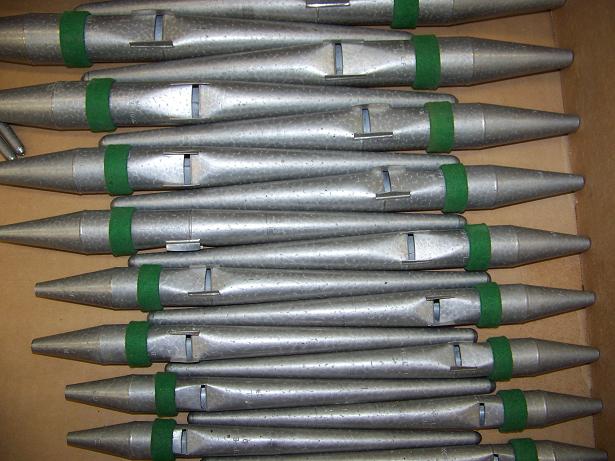 More of the Koppel Flute.  These pipes have a tapered open cap on top of them that gives them a distinctive sound.  The green felt holds the cap in place from sliding up and down as this cap is also used for tuning purposes. 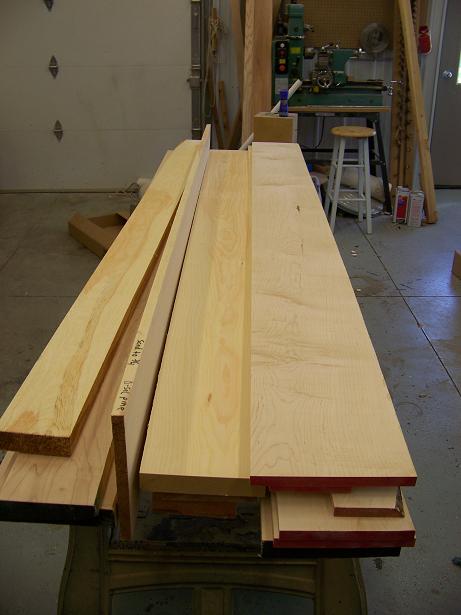 Next step is the construction of the windchests for the organ.  This is the pile of clear maple and clear pine lumber waiting to be milled into the various pieces required for their construction. 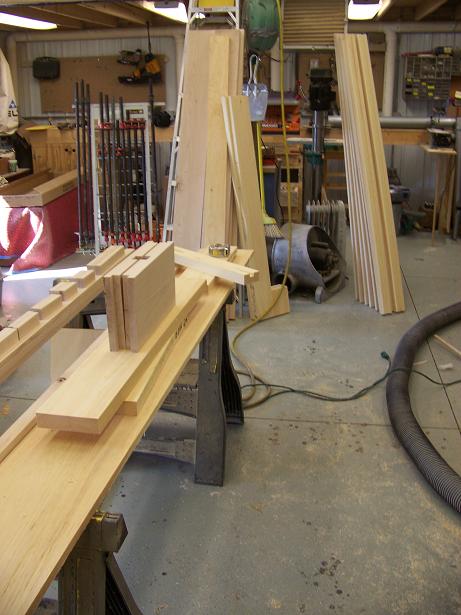 The lumber has now been cut and milled into the various pieces of the windchests. 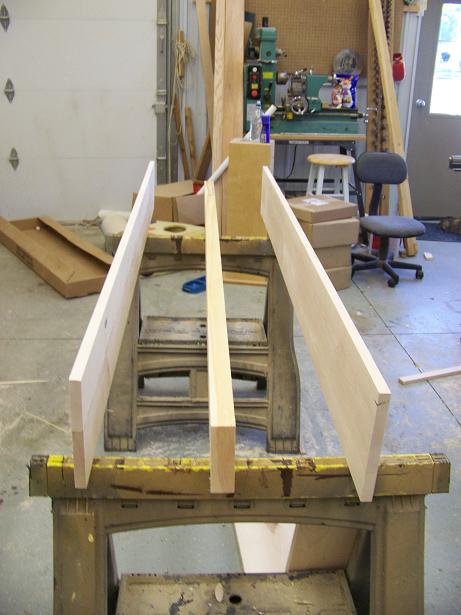 The two side rails and the center rail of the main windchest awaiting assembly. 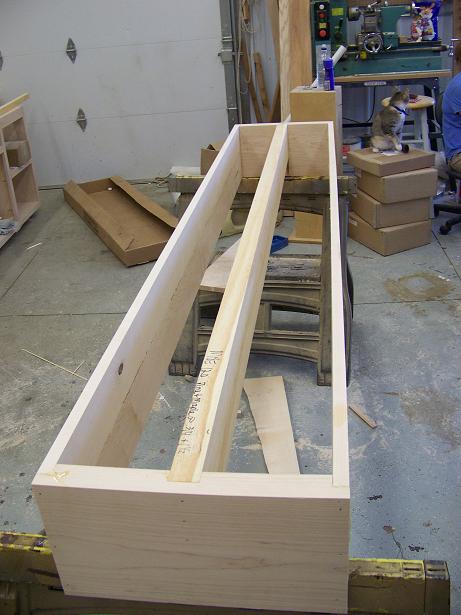 The main windchest frame after assembly with the end pieces. 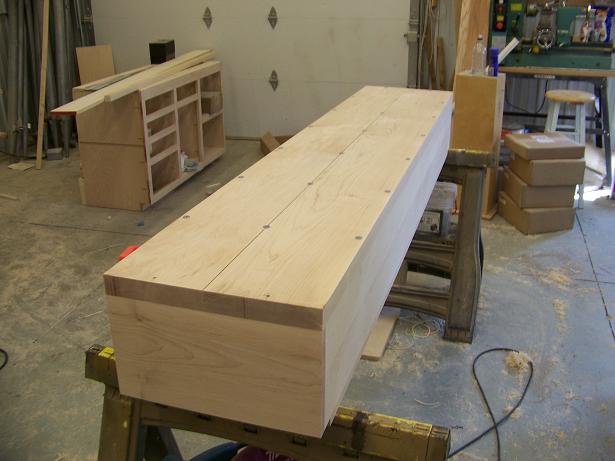 The main windchest with the toe boards fitted and installed.  These boards are planks of solid 1 1/2' clear maple and will have the toeholes for the pipes drilled in them and the pipe valves mounted under them. 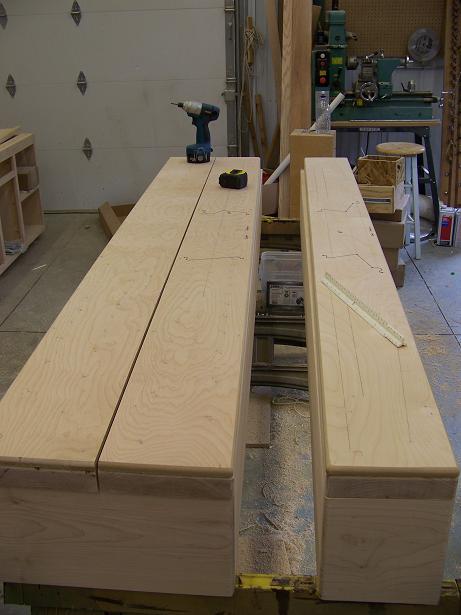 The main and facade windchests with the rack boards tacked to the toeboards.  The locations of the toeholes for each pipe have also been layed out on the tops of the rackboards. 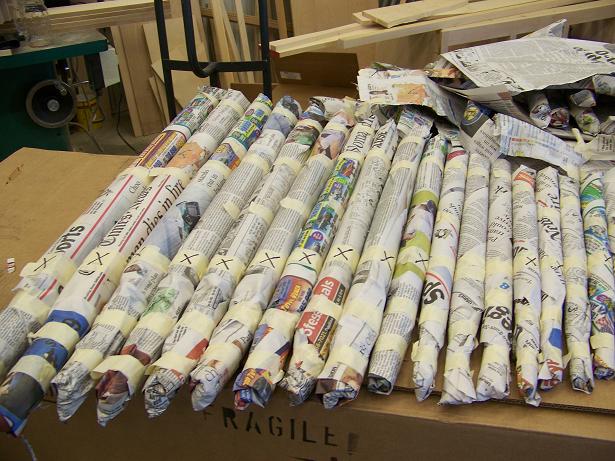 The shipment of new pipes from the pipe maker have arrived.  Here are some of the pipes still wrapped in protective newspaper. 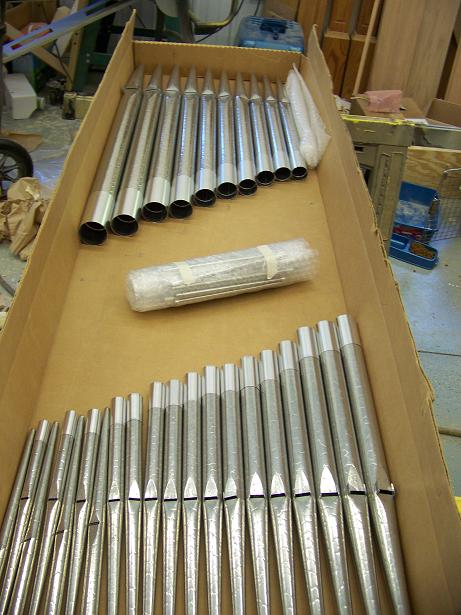 Pipes for the new 2' Super Octave unpacked and stored in trays. 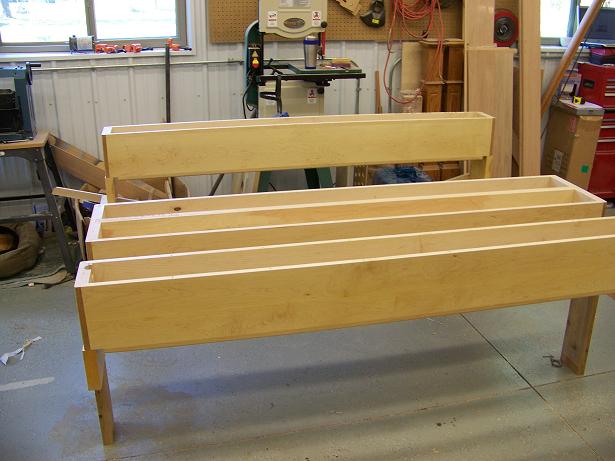 Here are the chest of the organ installed on their bearers.  THey will be supported between two walls in the church.  Here they are standing on temporary legs. 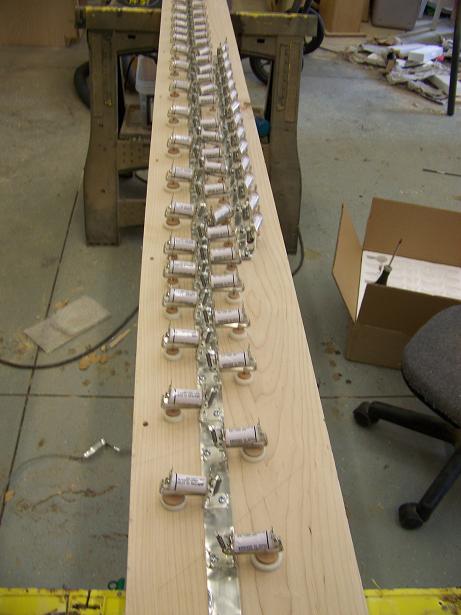 Electro-mechanical valves mounted to the underside of the toeboards.  Each pipe in the organ stands above one of these valves. 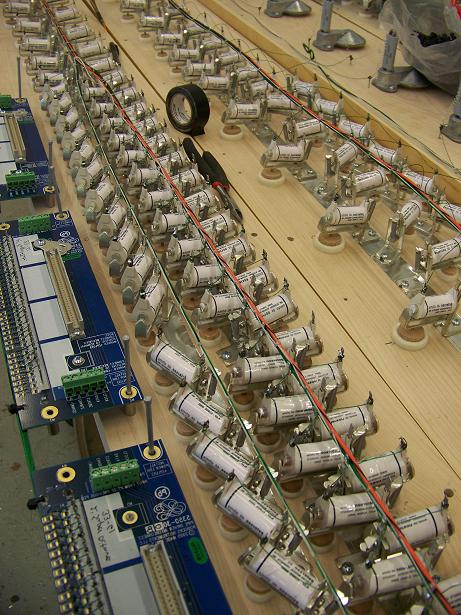 Pipe valves wired up to the solid state driver boards at the left. 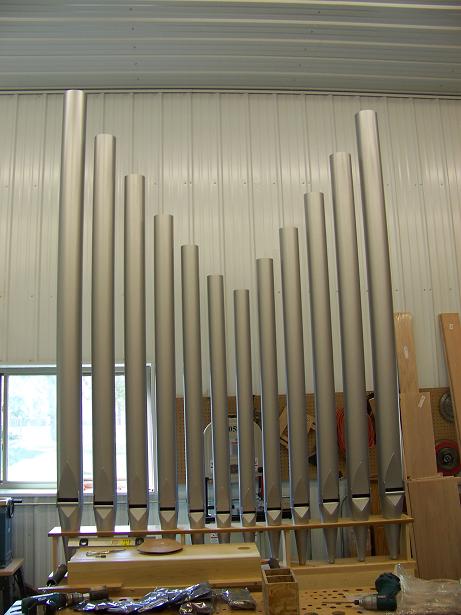 The lowest (and largest) 12 pipes of the 8' Principal. 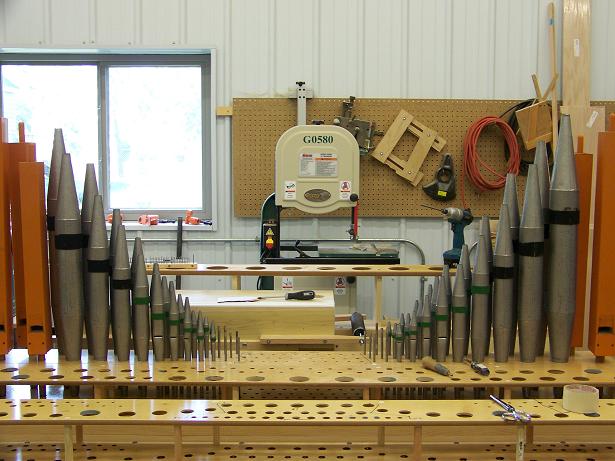 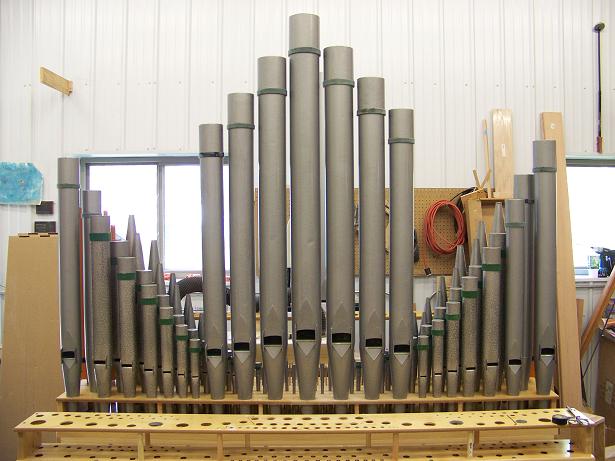 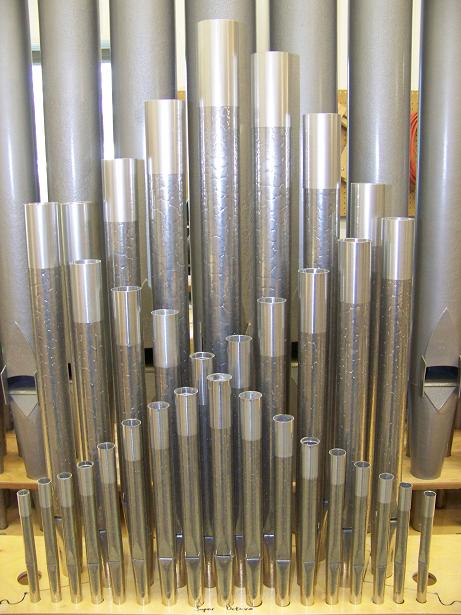 The largest 32 pipes of the 2' Super Octave.  These pipes are arranged decoratively in the center of the facade (front) pipes of the organ. 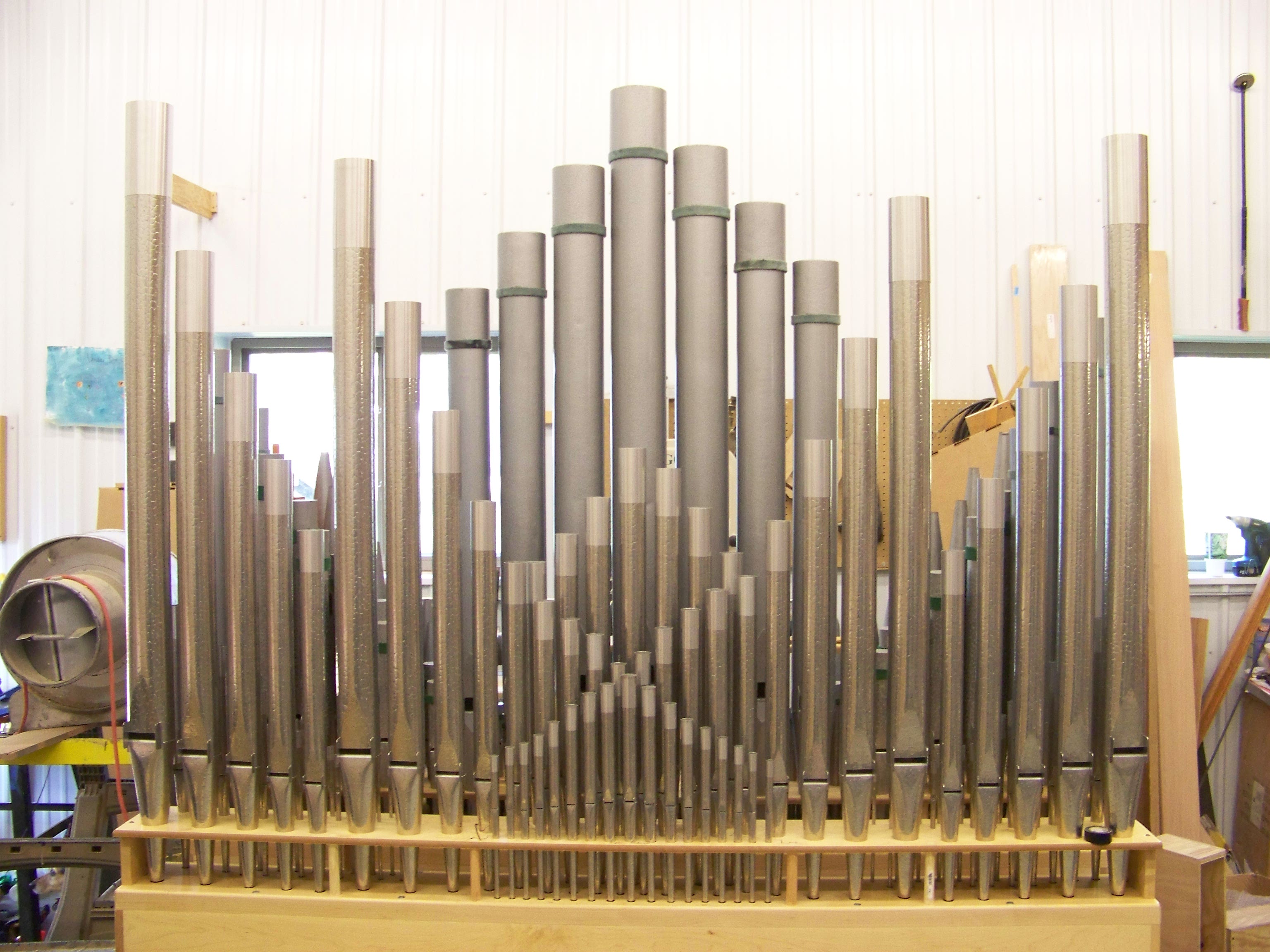 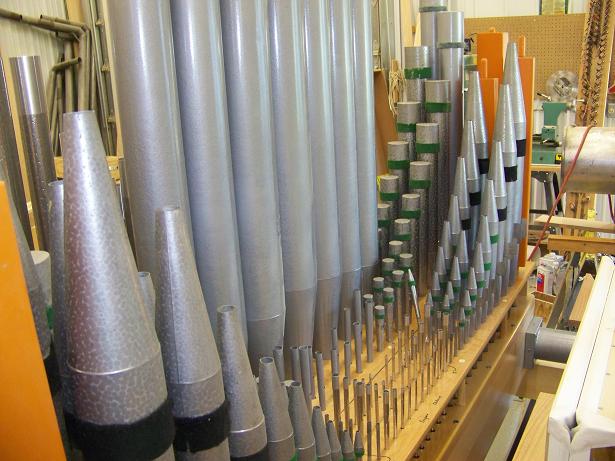 A vew of the Gedeckt and Koppelflute pipes from the back of the organ.  The bellows is also visible at the lower right.  The gedeckt pipes are flat on top while the Koppleflute pipes are pointed. 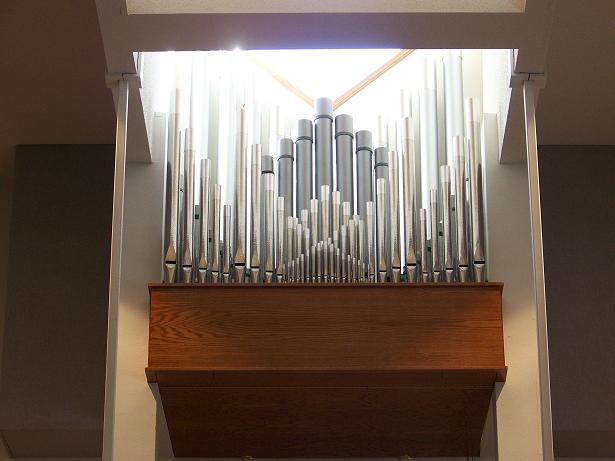 Installation is complete!  Appologies for the over-exposed pic but with a southern facing window behind the organ this was a bit challenging.  Perhaps I will be able to get a better picture soon.