Check back for updates.  New entries will be at the bottom. 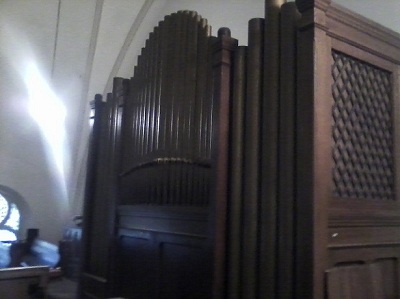 St. Anthony's is home to a Wicks organ 8 ranks from the 1920's.  It is in original condition but very tired.  The restoration will replace the failing mechanical relays with new solid-state electronics incorporating all the modern console conveniences and allowing for an expanded stoplist for this little unit organ.  The organ will also be cleaned. 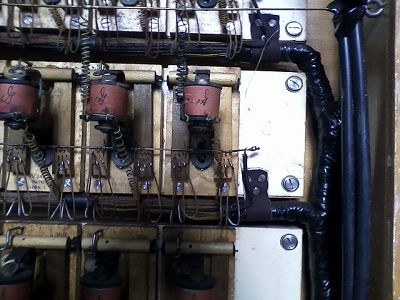 These are the original mechanical relays, fondly referred to as "mouse-trap" relays due to their resemblence to a mouse trap.  They are one of Wicks' many ingenious inventions.  When the relay is activated it actually cleans the contacts to prevent dead notes.  This system has worked well for many years but has finally started failing.  There are 154 of these units, one for each key, and all together they contain about 1200 electrical contacts.  The entire organ contains over 4 times that number of contacts all of which must work reliably in order for the organ to play properly.  All of this will be replaced by the new system. 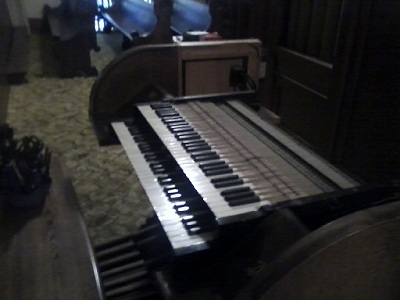 The console is being dismantled so that the various parts can be transported back to the shop for the restoration project.  The stop rail has been removed in this picture.  The restoration includes new stop tabs and their associated machinery. 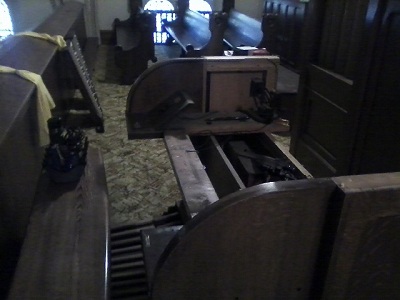 The keyboards have been removed in this picture.  They get new electrical contacts to replace the corroded and broken contacts of the old system. 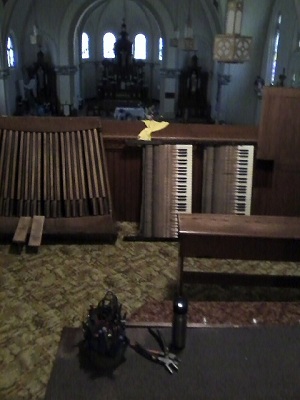 The keyboards and pedalboard ready to be carried down the stairs and hauled back to the shop. 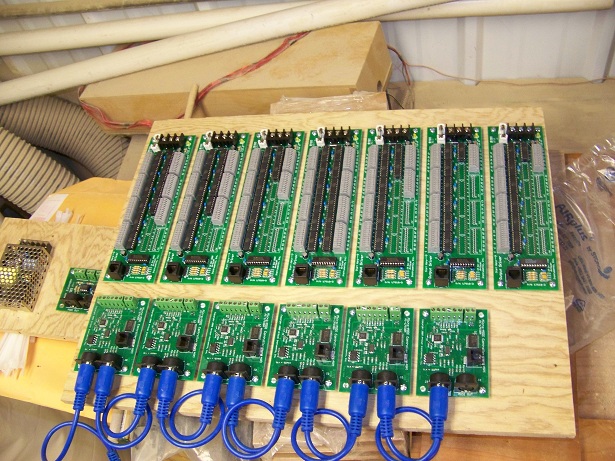 This is the part of the new system which replaces the "mouse-trap" relays mentioned above.  This small panel (about 24" x 24") replaces all 154 of the old relay units as well as the many other mechanical components which make up the electrical system. 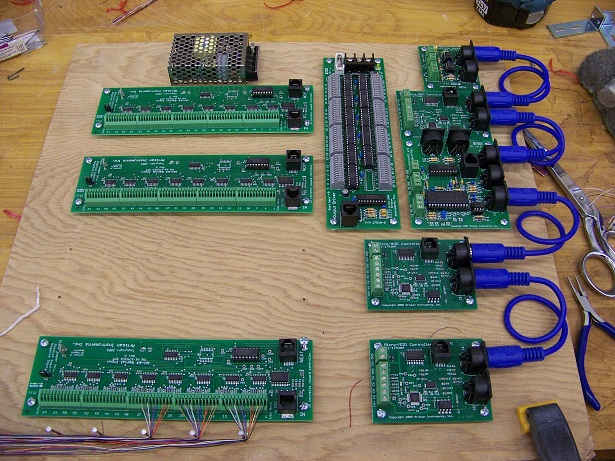 This is another part of the new electrical system.  This panel will be installed inside the organ console.  Here you can see some of the wiring being connected to the ciruit board at the bottom left. 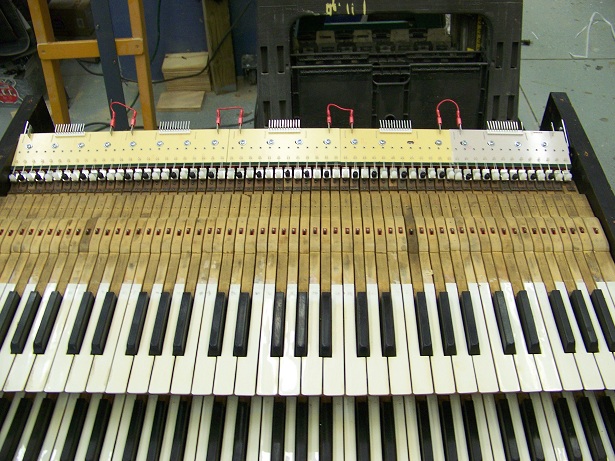 The new contacts have been installed on the existing keyboards. 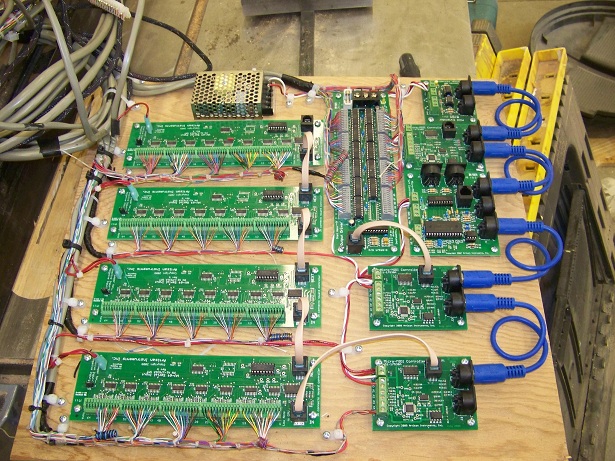 The new electrical system for the console with the wiring harnesses attached.  One wire for each key, stop, and button in the console. 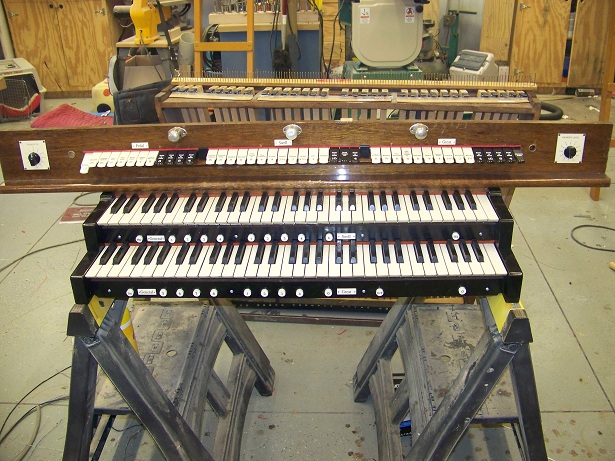 The original keyboards and stop rail with the new stop tabs and presets installed, also the controls for memory level and transposer. 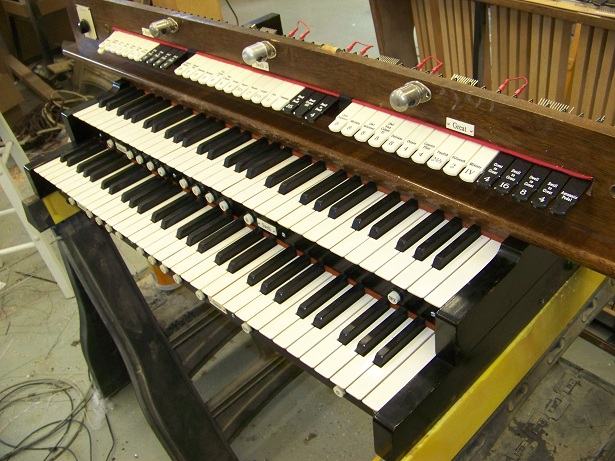 Another view of the keyboards and stops. 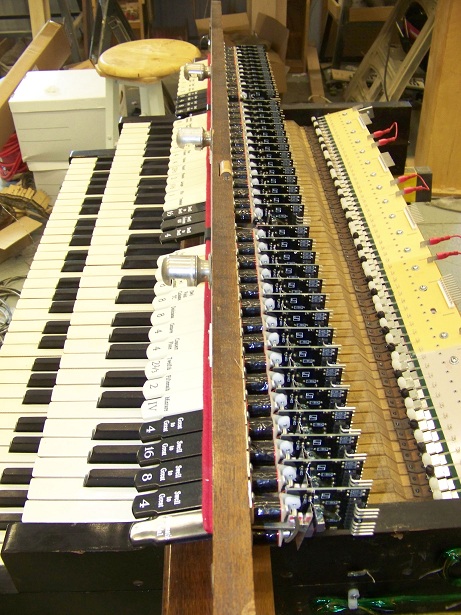 The row of devices to the right of center in this photo are the new stop action magnets.  They move the stops when a preset is pushed to place them into the combination that was preveiously saved on that preset.